Readers have had questions about Tim and Tookie’s early lives, particularly hers, because they are complicated characters who were impacted by their childhoods. Tookie Before Tim is intended to answer those questions. It might also encourage some people to read the Tookie series. This little ebook tells the life stories of the title characters from birth up to the fateful day on which they first met. Only Tim Sent Flowers starts where this book leaves off.

Today and tomorrow, I’m giving it away FREE to anyone who wants to download it. It can be read on the Kindle device or the Kindle reader available for computers.

If you like it or if it increases your interested in reading more about her, email me at GeorgeQKaplan@gmail.com. If you feel like it, send me a blurb.

It’s happened again. Tookie was selected as a finalist for the Reader Views Literary Awards for 2018-2019 Humor category. The awards have been announced and, once again, Tookie doesn’t get to wear the white wedding gown. This time she’s the maid-of-honor, being the runner-up.

The cover, designed by Black Opal Books’ artist Jack, stands out among the other finalists as seen below. Unfortunately, Facebook considered the photo too suggestive because Tookie’s pulling down her panties and wouldn’t accept ads with the cover in them. So, I had to cover them up with a box containing “Banned by Facebook.” Now, I can cover the descending drawers with a sticker.

If you’d like to know about Tookie’s early life, read the free ebook Tookie Before Tim. If you don’t have Amazon Prime, just email me at GeorgeQKaplan@gmail.com to get a copy.

Yesterday, I uploaded a small ebook to Kindle under my name rather than Black Opal Books, the publisher of the other Tookie books. The reason I did this is that I intend to give this short ebook away as much as possible, something that would be unfair to my publisher if they had invested in it. Tookie Before Tim tells the life stories of the title characters from birth up to the fateful day on which they first met. Only Tim Sent Flowers starts where this book leaves off.

Readers have had questions about Tim and Tookie’s early lives, particularly hers, because they are complicated characters who were impacted by their childhoods. This little book is intended to answer those questions. It might also encourage some people to read the Tookie series.

I put it under the KDP Select program because more people will be able to get free access (I think) to it that way. Its Amazon listing states, “$0.00 kindleunlimited.” Kindle Unlimited is an ebook subscription service that costs subscribers $9.99 a month and (according to Amazon) provides free access to over a million titles.

The Amazon listing also states, “Borrow for free from your Kindle device. Join Amazon Prime.” Apparently, Kindle Unlimited is one of the things paying $99.00 a year buys, in addition to free shipping. So, if you’re an Amazon Prime customer, you’ll be able to read Tookie Before Tim for free so long as it’s in the Kindle Select program.

KDP Select also allows authors to give away their ebooks five days out of each ninety-day enrollment period. I intend to take advantage of this feature and will announce the free days a week ahead to give all who aren’t Kindle Unlimited customers the opportunity to read Tookie Before Tim for free.  Click here for Amazon listing.

I will also make ARCs available to those interested in reviewing it. Email me at GeorgeQKaplan@gmail.com if you desire a review copy.

Being an unknown writer poses numerous challenges these days, chief among them is getting people to read your books. One way of doing that is to enter contests, some of which review the book you enter. That is something. That my books usually make the finalists lists for their categories feeds my optimism that one of them will eventually win something. Even making the cut as a finalist gets the book some exposure, if only to other contestants and the reviewers. And there is always the hope a reviewer is someone important who might see the genius in the book that other, lesser, minds have missed.

When an email from Beach Book Festival arrived in my in-basket, I perked up. My Tookie books would be perfect beach reads. So, I entered the first one, the one Midwest Book Review* raved about, Only Tim Sent Flowers. Selecting a genre is always a challenge, especially since these contests don’t standardize the choices. I picked General Fiction, mostly as a default, and shifted my focus to other things.

Outlook has a nasty habit of shunting emails off to the spam folder almost randomly. This “feature” caused me to miss several important messages before I became aware of it. Now, I make a habit of checking the spam folder for good messages—except when I’m overloaded. While making a routine scan early this week, I was pleasantly surprised to find a message informing me that my book had made the winners’ list, meaning that it was either a winner, runner-up or honorable mention. A quick check of the BeachBookFestival.com revealed that Only Tim Sent Flowers came in second. Seeing eight other books listed as honorable mention gave me some consolation: my book was at least in the top 20%.

Contest officials wouldn’t tell me how many books were entered in my category but did say only 5% place. I chose to ignore the horse racing meaning of the term and interpreted place as meaning “getting placed on their winners’ list somewhere. That makes me feel better. 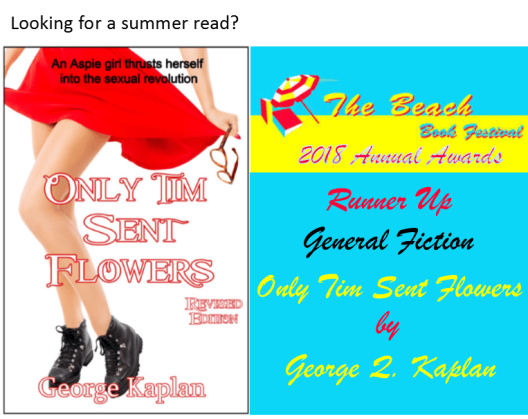 I owe readers an apology. In September, I started a short series on how autism in girls is different than in boys. The last post promised a look at how autistic girls pass as being neurotypically normal by compensating for their situation. Since making that promise, I have been distracted by a number of pressing issues and opportunities. Now, I will finally get back to exploring how girls often mask their autism.

A core difference between boys and girls on the autism spectrum was observed by Dr. Louis Kraus, a psychiatrist at Rush University Medical Center in Chicago who specializes in autism: “Girls tend to want to socialize and be part of a group, even though it may be awkward. Boys, on the other hand, tend to be more isolative.” That difference causes girls to take steps to be accepted in social groups whereas boys often don’t bother.

One young woman, who wasn’t diagnosed until she was 19, always played with boys because she found sports easier and boys didn’t talk as much. Amanda Gulsrud, clinical director of the Child and Adult Neurodevelopmental Clinic at University of California, Los Angeles, observed that girls appear to have mastered what some call “social camouflaging” to mask their autism. Girls in studies stick close to the other girls to look like they are socially connected when they’re not really connecting. They didn’t have deep, meaningful connections or exchanges; they flitted in and out of the social connection.

Girls on the spectrum tend to be quiet and behave more appropriately than do boys. At least at younger ages, girls tend to be more verbal and socially interactive than boys. As girls age, they develop coping techniques and become experts in pretending not to have autism by camouflaging it.

A common way of masking is to develop a repertoire of responses to parrot when situations occur that she does not instinctively know how to handle. Tookie, for example, has little empathy for others (a common Asperger’s trait) but, over time, accepted that she needed to respond in an appropriate way to people who were grieving or undergoing painful experiences. She adopted, “I’m so sorry” as her stock response each and every time she perceives the need to provide emotional support.

The use of a stock phrase works most of the time but becomes repetitive with people to whom she has become close. This is yet another way in which maintaining social relationships is difficult for Asperger women.