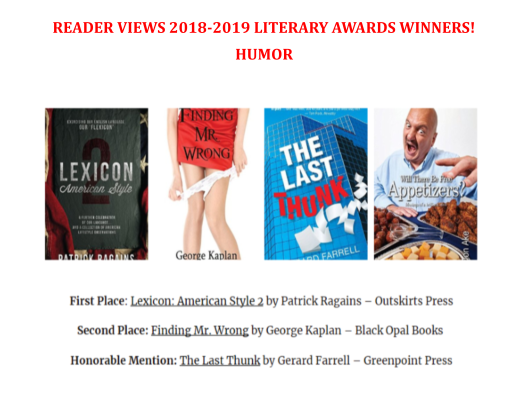 It’s happened again. Tookie was selected as a finalist for the Reader Views Literary Awards for 2018-2019 Humor category. The awards have been announced and, once again, Tookie doesn’t get to wear the white wedding gown. This time she’s the maid-of-honor, being the runner-up.

The cover, designed by Black Opal Books’ artist Jack, stands out among the other finalists as seen below. Unfortunately, Facebook considered the photo too suggestive because Tookie’s pulling down her panties and wouldn’t accept ads with the cover in them. So, I had to cover them up with a box containing “Banned by Facebook.” Now, I can cover the descending drawers with a sticker.

If you’d like to know about Tookie’s early life, read the free ebook Tookie Before Tim. If you don’t have Amazon Prime, just email me at GeorgeQKaplan@gmail.com to get a copy.